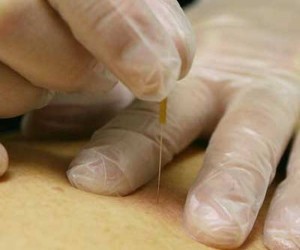 Recently, I attempted to contact and discuss an interesting paper I came across authored by James Dunning DPT, Raymond Butts PhD DPT, Thomas Perreault DPT, Firas Mourad OMT and Ian Young PT titled Dry needling: a literature review with implications for clinical practice guidelines. Interestingly enough, five out of six of the authors of this paper work for the Spinal Manipulation Institute where they teach physiotherapists, osteopaths and medical doctors dry needling and spinal manipulation with James Dunning being the president of this institute. This conflict of interest was declared in the appropriate section of the paper.

Unfortunately, Mr.Dunning appeared to be suspicious of my intentions and asked which organization I represented, what was my background and my work situation. When I informed him that I authored a blog called Needle Chat, and I wanted to ask him about his paper, he explained he was not interested in giving sound bites to acupuncture organizations that believe physiotherapists should go to acupuncture school before doing dry needling.

I further informed Mr.Dunning that I wanted clarification on certain points made in his paper regarding the techniques described. This appeared to push Mr.Dunning over the edge and he replied that he wasn’t interested in discussing his paper further on a blog, and any further comment would be dedicated to peer reviewed journals. He informed me that I should write a letter to the editor if I wanted to engage him in an academic discussion. Finally he stated that his point of view was made quite clear in his paper.

Surprised and confused by this response, I decided my only option was to use my interpretation of the paper to analyse what I believe was proposed in this literature review.

When most people think about dry needling, they think about using thin filliform needles to penetrate the skin and stimulate trigger points in an attempt to manage pain. In fact, the American Physical Therapy Association states the following on dry needling.

Dry needling is a skilled intervention that uses a thin filiform needle to penetrate the skin and stimulate underlying myofascial trigger points, muscular, and connective tissues for the management of neuromusculoskeletal pain and movement impairments. Source: APTA

However Mr.Dunning’s paper questions this definition stating that dry needling should not only be redefined to involve more anatomical structures, he appears to want the practice of dry needling to be completely changed based on emergence of evidence that seems to contradict relying only on trigger points. This is where it starts to get confusing.

The majority of dry needling videos you will see online show an “in-and-out technique” or a pistoning or sparrow-pecking technique to stimulate these structures and elicit a local twitch response that was thought to be responsible for the inactivation of trigger points according to Hong et al (1994). The APTA even states:

Deep DN has been shown to inactivate TrPs by eliciting local twitch responses (LTR) which are modulated by the central nervous system. Source: APTA

Next the authors argue that using acupuncture studies for their own evidence base to dispute the reliance on trigger point dry needling is valid because:

none of the studies used medicine and/or injectate in conjunction with their needling procedure; therefore, all studies fit within the strict definition of dry needling, regardless of terminology

The paper cites dozens of studies that used the term acupuncture but referred to them as “dry needling literature” in the paper. The authors mention that

Physical Therapists Should Not Ignore the Findings of Western Acupuncture Trials

At this point the paper appears to begin to suggest that dry needling should start to more closely resemble acupuncture practice by using techniques such as needle retention, and inserting needles at distal points due to their perceived lack of high quality evidence for trigger point dry needling.

Multiple Needles Should Be Left In Situ for 10–30 minutes

It is quite confusing to me, an acupuncturist when there is something like dry needling that started out relatively unique in contrast to acupuncture, in which a local twitch response was purposefully elicited to deactivate trigger points, that is now attempting to resemble acupuncture closer than ever before by borrowing the acupuncture literature and directly using techniques found in this literature as an evidence base for new clinical guidelines taught at the Spinal Manipulation Institute but still wanting call it dry needling, and claiming that they are different when in fact they are describing none other than medical acupuncture.

Western medical acupuncture is a therapeutic modality involving the insertion of fine needles; it is an adaptation of Chinese acupuncture using current knowledge of anatomy, physiology and pathology, and the principles of evidence based medicine. While Western medical acupuncture has evolved from Chinese acupuncture, its practitioners no longer adhere to concepts such as Yin/Yang and circulation of qi, and regard acupuncture as part of conventional medicine rather than a complete “alternative medical system”. It acts mainly by stimulating the nervous system, and its known modes of action include local antidromic axon reflexes, segmental and extrasegmental neuromodulation, and other central nervous system effects.